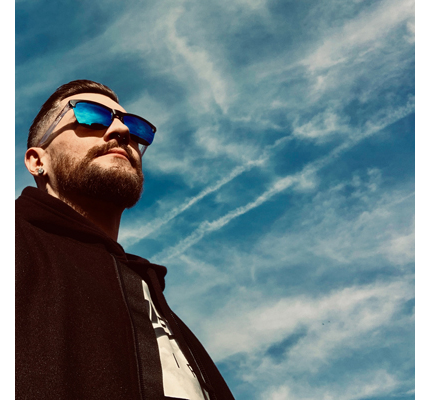 With only five years the the Austrian DJ and Producer Martin K. better known as „GLOW THE SKY“ (DJ M-Tone, Laser Noize) started to learn drums, guitar and piano.
Just a few years later his older brother introduced him to the world of „Turntablism“ and he instantly fell in love with this artform,
since it was the first opportunity to combine everything he learned so far.

As the years passed he advanced to one of the illest turntablists our country has seen so far, and grabbed quite some IDA-Awards on his way up (International DJ Association).
Two times Austrian Technical Champ and IDA-World Finalist in 2009 and more…
Beside he was still producing and releasing Music. With DJ-SIGHT and FISHERMAN he produced the outstanding Turntablism album “Phonosapiens - Circulating Instrument” in 2008 and with his solo projects „DJ-M-Tone and Laser Noize“ he released quite some singles and EP´s over the last decade on „Duzz Down Sun“, „Super Plus Records“ and some other stations!
Not to forget his cuts for US Crews and Rappers over the years, e.g. Cerebral Vortex and Ezekiel 38 - just to name a few…

All this led to many great gigs, a US Tour and he was on stage with: DJ Vadim, Lorn, M.O.P., Jeru the Damaja, Rasco, Loop Troop and more…
Already a few years ago he startet his project „Glow The Sky“ where he advanced his musical output moving from hiphop-influenced electro more torwards to Bass Music.

Listen and buy Glow the Sky